Revolution-OS is a documentary on the story of Linux, the open source operating system, starring Richard Stallman (RMS), Linus Torvalds and Eric Raymond. A very interesting film not only for Linux fans but anyone interested in technology and the history of computing. The full video is currently available to watch on Google Video, embedded below:

I have been meaning to write a post for the new StaffsLug (Staffordshire Linux User Group) website for sometime. I had intended. for my first post. to write a bit on the UK Governments ‘Open Source, Open Standards and re-use Action plan‘ but this will have to come later. As this week saw the release of the latest version of the ever popular Ubuntu 9.04 I thought it important that the Staffslug website had a post, so I wrote the post below which can be found on the site itself here.

This week saw 100’s of release parties for arrival of the latest version of Ubuntu Linux. Code named Jaunty Jackalope Ubuntu 9.04 (9 for 2009 and 04 for April) has arrived on time based on Canonical’s 6 monthly release cycle. Ubuntu 9.04 is not an LTS (Long Term Support) edition so will get 18 months of free updates (LTS receive 2 years free updates and are generally thought to be more stable). As ever, work has already started on the next version 9.10 code named Karmic Koala with the next LTS version being 10.04 to be released in April 2010.

9.04 Ubuntu does not contain any radical changes, as is often the way with a 6 monthly cycle, but does finally include OpenOffice.org 3.0 and also promises faster boot time. Other improvements come from updates to Gnome (the default Ubuntu desktop) and application updates like Evolution (Ubuntu’s  Outlook equivalent) which now comes with exchange server compatibility.

As well as the Gnome Desktop default 9.04 there is also Kubuntu 9.04 with KDE desktop,  Xubuntu 9.04 with XFCE desktop, Ubuntu Server Edition 9.04 with no graphical user interface and the new Ubuntu Netbook remix 9.04 designed for netbooks like the Asus eee’s and the Acer Aspires.

The video is now on youtube (as below) but for the freedom fighters it is available in ogg vorbis format here which can be played on VLC the cross platform media player or as Alan quite rightly puts it:

If you are one of those poor souls still using proprietary software, you might need to read this first. The video is encoded in Ogg, a free an un-patent encumbered format that is really free to use. Of course you could go and download a free operating system too and rid yourself of the shackles and chains which Stephen so eloquently describes. 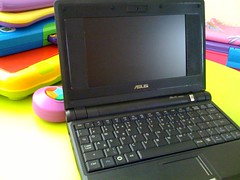 Finally I have started setting up my eee and am looking to get a good set up for blogging. I have done some quick google searches but have found no decent recommendations so I am posting this using scribefire a firefox plug in which appears very functional. I will also have a look at flock as that has a blogging client built in. 3rd party software for blogging appears one area where a mac has a lot more options than both linux and windows (marsedit springs to mind). I will also try posting directly into wordpress as the 2.5 version appears much improved.